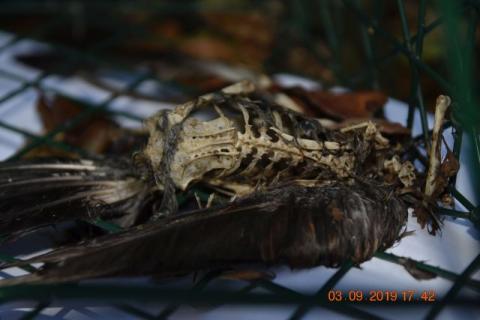 After the discovery of a dead white-tailed eagle, a major case of poisoning in the Waldviertel (Lower Austria) was uncovered in early 2019. Now the hunter who had by then been in charge of the hunting area was convicted of poisoning and sentenced for cruelty against animals.

Already in 2019 a poisoned white tailed eagle was found by a jogger beside a dirt road. After the case became known, the public reacted with great dismay. Especially in the region where the bird was found a lot of rumours started and people gave hints that led to a 70-year-old hunter and gamekeeper. The police took up the investigation and combed the hunting ground accompanied by conservation dogs specialized in carcass search.

During the search they came among others across a blackbird that had died in a "crow trap". The banned pesticide was seized during the subsequent house search with poison-sniffing dog Falco, which was called in the framework of the LIFE PannonEagle project. Animals were found in the suspect's freezer - including animals poisoned with Carbofuran. A strictly protected eagle owl was also found among them. In two days of trial, the case was finally brought to the landing court and a verdict of guilt was reached. The verdict is six months conditional and 120 daily rates unconditional. The final words of the judge were:

"I have no doubt at all that it was as stated in the criminal complaint", said the judge in the reasoning of the verdict. Especially serious was that carbofuran and the poisoned animals that had been found at the verdict’s house. Above all, the unconditional fine is ment as  a signal in both a special and general preventive sense. Closing the judge stated: "We have always done it this way, but this is no longer possible today.

An investigation of the perpetrator was only possible because credible hints from the public supported the investigations of the police, the public prosecutor's office had pressed for a house search and specially trained dogs were used, which brought to light additional incriminating material.

This is an important step in the fight against illegal persecution of birds of prey in Austria, which points the way forward. Also an important success for the LIFE Project PannonEagle, which shows that we are on the right track.