Two young rescued Imperial eagles can return to the wild 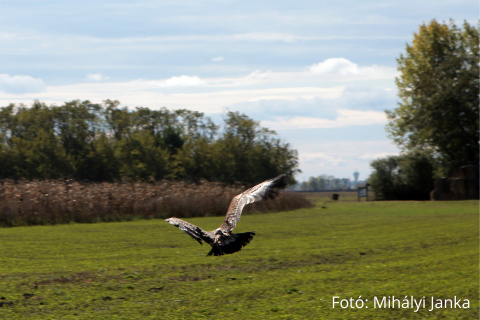 The population of Imperial eagles is growing, however, non-natural causes of death, like poisoning, is still a serious threath. Occasionally,  there are symptoms of problems that threaten wildlife as a whole, such as plastic pollution: carelessly left baling twine.

One of the eagles was found by associates of MME/BirdLifeHungary and the Hortobágy National Park Directorate, in one of the Imperial Eagle nests in the Jászság area. Its tarsus was entangled in bailing wire, which cut into the flesh almost reaching the bone. Following careful consideration of particular needs, the bird was taken to Jászberény where it was treated by the vets of the Eagle Centre. In order to faster healing, it further received physiotherapy treatment by the vets of Budapest Zoo. As a result of the exemplary collaboration, the bird fully regained his strength so he could return to the Eagle Centre.

The other bird was discovered by the local ranger of the Aggteleki NP in the Hernád Valley in a weakened state on Aug 18. The recently fledged eagle showed symptoms of poisoning and it was feared that it may die without immediate intervention. Following some logistics, it was taken to the Eagle Centre’s in Jászberény. The bird’s clotting rate indicated rodenticide poisoning, which has been causing frequent problems for the eagles recently. After a few days of treatment, the bird was out of danger and has been getting stronger in the Centre since its recovery.

Thanks to the newly built, spacious, high-rise aviary, both eagles could work on their flight muscles in the past few weeks. According to their condition, the bird found in Aggtelek National Park could be released on the 18th of October, while the bird from the Jászság area will most probably be released on the beginning of November.

We will be able to follow both birds via GPS transmitters.

The moments of release (we are grateful for the photos fot the 9 year old Janka Mihályi :) )