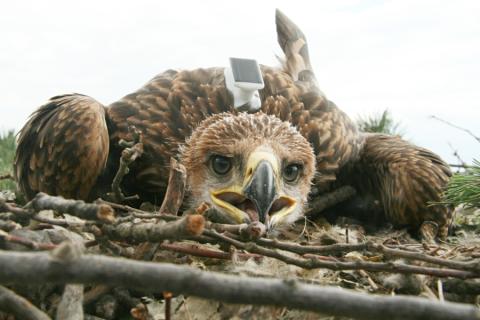 Monitoring of Eastern imperial eagles with GPS transmitters brings us many interesting data on their life. Thanks to the obtained data we know where exactly the birds fly and breed, whether they are in good health or having troubles.

Within the PannonEagle LIFE project, the professionals from the Raptor Protection of Slovakia (RPS) have put GPS transmitters on 10 young birds. The GPS transmitters, equipped with a little solar panel charging their battery, are attached to the back of a bird, almost as a backpack. Attaching a transmitter requires precision and thorough checking so that the equipment would not hinder the individual from moving or it would not slide down. Also, GPS transmitters are lightweight (20g) so that they would not weight down the bird.

As early as in the first months after attaching the transmitters, it was shown that the mortality of young individuals is very high.

A young bird from the eastern Slovakia died in September 2017, approximately a month after leaving its nest. In this case, the veterinary examination found out the natural cause of death – an respiratory illness. 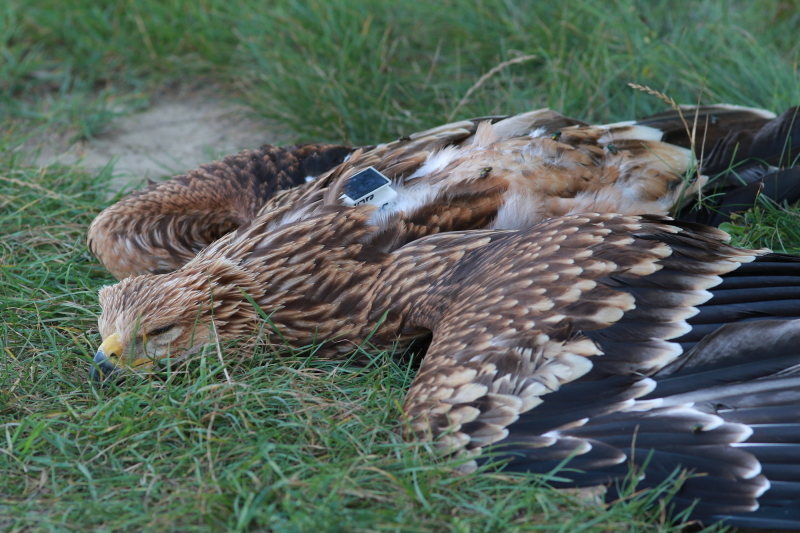 In the first months after leaving its nesting locality, the female eagle roamed a vast area. It was not until Christmas, on 26 December 2017, when the signal started coming from only one place. That was a sign that something bad had happened to the bird. A member of RPS found it dead between the villages Diakovce and Horné Saliby. The police was called out, as the bird had been showing signs of poisoning. The veterinary analyses have proven the poisoning by carbofuran. The sad part is that not even the Christmas holidays stopped the offender from laying poisoned baits. 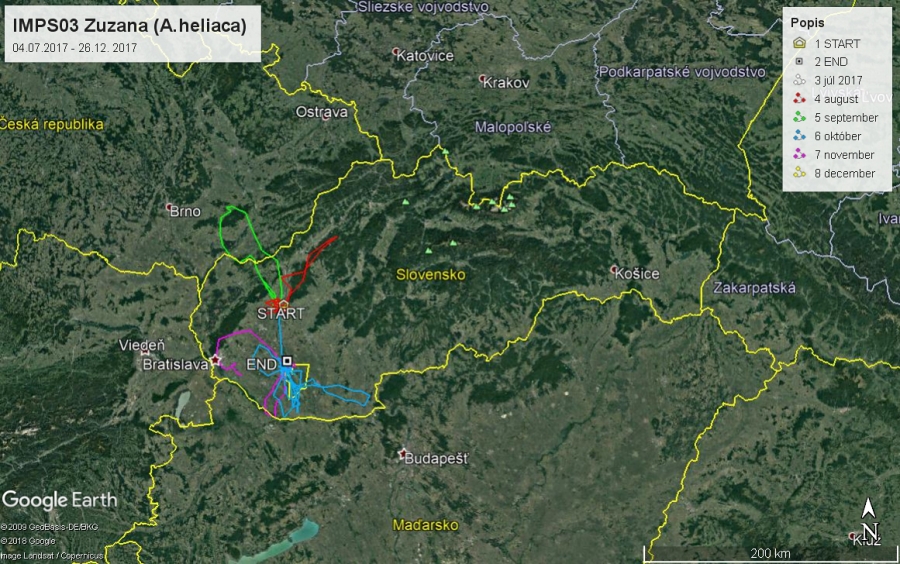 The way of Zuzana (source: RPS) 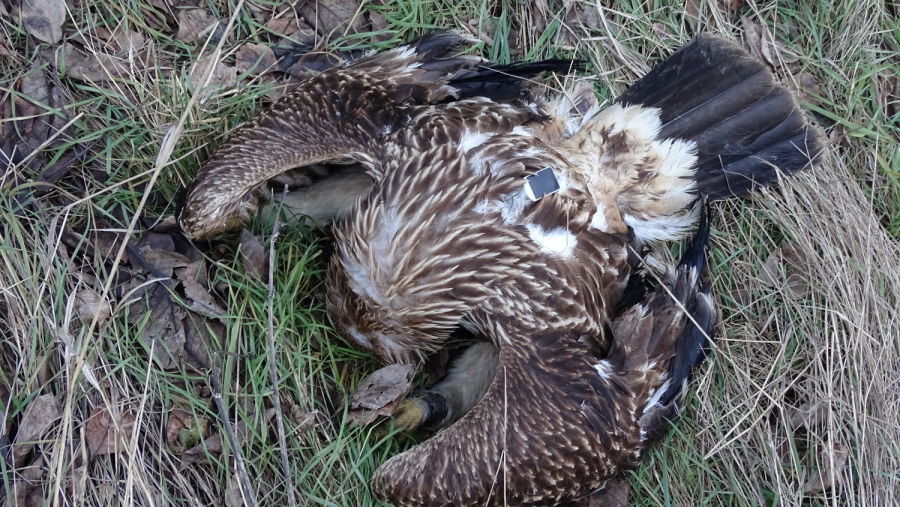 This female eagle hatched in 2017 in the east of Slovakia. In the course of its life, it flew across the area of twelve countries. The bird flew even to Lithuania, which is, reportedly, only the seventh confirmed observation of the Eastern imperial eagle in this Baltic country. In April 2019, the Romanian colleagues found it poisoned in the frontier zone with Hungary. The veterinarian did not manage to save it. The eagle died most probably in consequence of eating a poisoned vole or European hamster. It was because in that very period and area rodenticides were used in the fields. 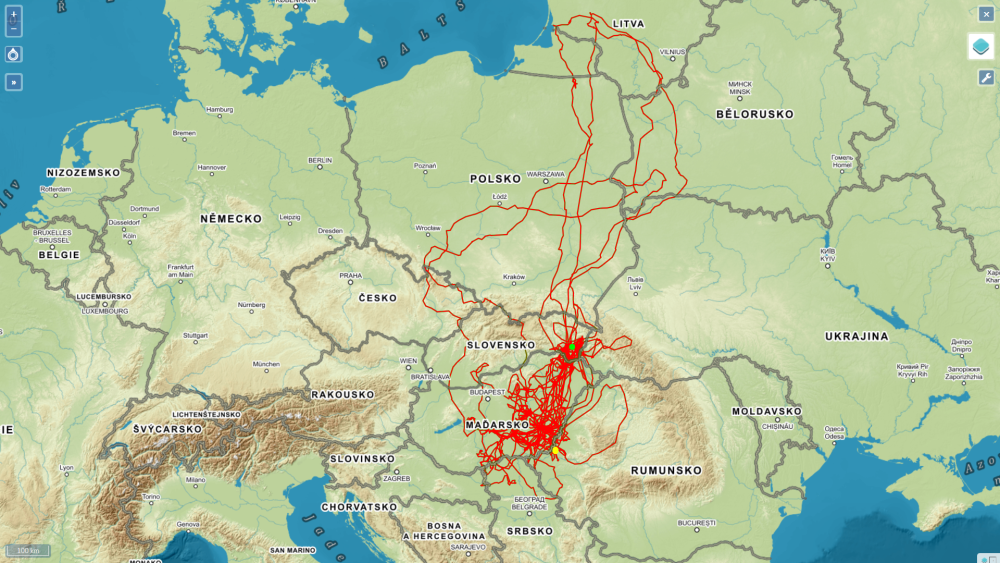 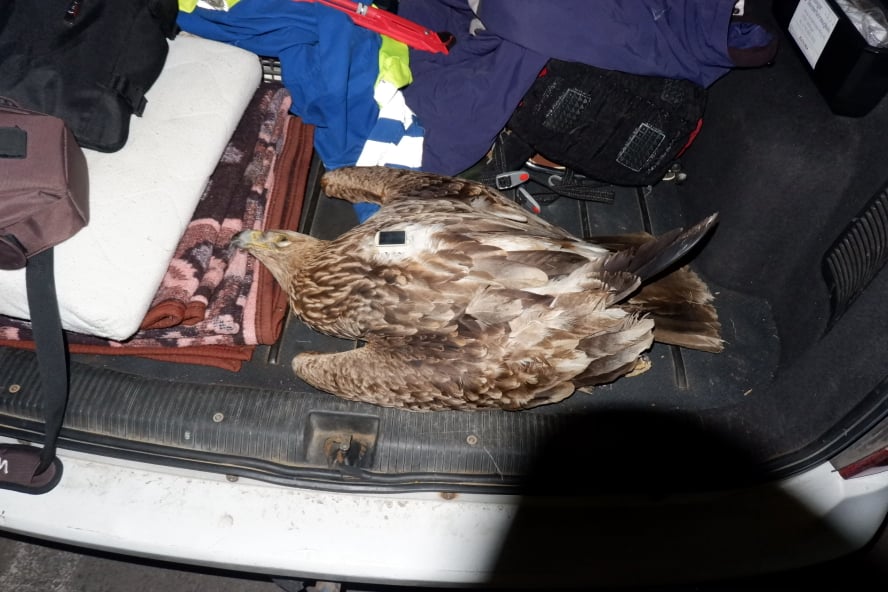 The eagle "Stefania" died most probably in consequence of eating a poisoned vole (photo: Milvus group 2019)

In addition to the mentioned individuals, we lost contact also with Peter, Sára, Barbora and Rasťa.

In these cases we cannot rule out a technical difficulty of the GPS transmitter nor the death of the individual. In several cases the last data of the position were from the locality near the railway or highway.