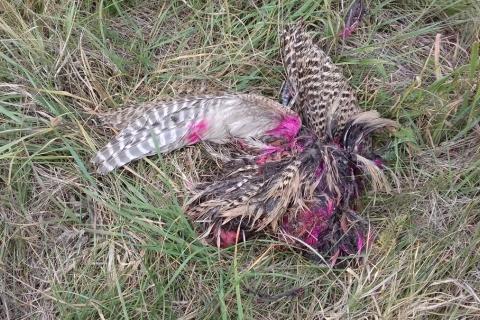 Carbofuran is one of the world's most toxic carbamate pesticides. It used to be an insecticide farmers commonly sprayed on their crops. But because of its high toxicity and risk, carbofuran has been banned throughout the European Union since 2008.

Its possession and disposal is likewise prohibited by law. Even though use of carbofuran has been forbidden for more than a decade and it has never been intended for retail sale, ordinary people still have it stockpiled. When talking about bird crime, carbofuran is the most commonly abused substance used in the intentional poisoning of raptors. It is equal in properties to nerve-paralytic agents used in chemical warfare. Just to illustrate, less than two grams of carbofuran can kill an adult human being!

In 2018, extensive illegal poisoning from carbofurnan-laced meat baits was reported in the District of Nové Zámky. Police have still not been able to track down the perpetrators.

But the investigation has produced other results. Information was acquired by the police that led them to reasonably suspect the illegal home possession of carbofuran within the district. They were able to obtain a warrant to search the person’s house in June 2018. The police were assisted by Falco, an experienced Hungarian sniffer dog, and his handler. Falco has been specially trained through LIFE Helicon to search for carbofuran and called upon in similar cases in Hungary to assist.  Thanks to Falco’s tracking success, dogs in other European countries have been specially trained, as part of a project by LIFE PannonEagle, to detect carbofuran and dead animals.

While Falco was searching the house, he spotted two plastic mineral water bottles of an unknown white solution hidden behind a boiler. A subsequent forensic chemical analysis determined the contents to be carbofuran. Based on the evidence that was collected, the district court sentenced the homeowner in June 2020 to twelve months’ imprisonment, which was suspended for two years. The sentence was then appealed and subsequently overturned by the regional court in October 2021. Instead, a fine was imposed after taking into account the offender's age, state of health and previous record. The court also imposed an alternative sentence of two months’ imprisonment were the convicted perpetrator not to pay the fine. The ruling in this case was final.

In terms of judicial practice and case-law, this is the first ever conviction in Slovakia for illegal possession of carbofuran. Therefore, anybody that even negligently manufactures, imports, exports, transports, purchases, sells, offers, exchanges, modifies, uses, transfers, stores, disposes of, or otherwise procures or possesses carbofuran for themselves or anybody else without a permit will be charged with an offence under Section 298 of the Penal Code with unlawful manufacture and possession of nuclear materials, radioactive substances, high rush chemical substances, and high risk biological agents and toxins.