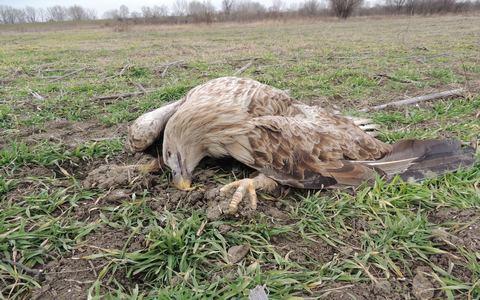 Very last case of poisoning recorded in Serbia happened on February  23rd 2020., near the nest site of the only known remaining breeding pair of Imperial Eagles in the vicinity of Novi Knezevac, Serbia.

Mirjana Rankov, member of the BirdLife Serbia (Bird Protection and Study Society of Serbia) found and reported suspected poisoning of a White-tailed Eagle near the carcass of the Golden Jackal lying on the agricultural field.

On Monday February 24th 2020., Environmental Inspection, Police forensics, members of BPSSS and people from Institute for Nature Conservation of Vojvodina Province, searched the area, and took the evidence for prosecuting the possible suspect of this act. Also the body of the White-tailed eagle and Jackal were sent to the Scientific Veterinarian Institu of Novi Sad for necessary analyses.

that first search of the nearby field didn't resulted in any new findings, but to be sure and safe, we called the colleagues from BirdLife Hungary (MME Hungary) and their dog unit to help us with more detailed search.

On Thursday February 27th 2020., Zoltan Kalan, Kiskunsag National Park ranger and his dog Samu, came to the location in Serbia. After conducting the detailed search with the dog, what we found scocked us. Approximately 200 meters from the location where the carcasses of White-tailed eagle who obviously was feeding on a dead Jackal were found, the dog smelled 5 more dead Jackals, one Common Buzzard, one Magpie and one Fox.

Some of the dead animals found by the search dog from the BirdLife Hungary (photo: Mirjana Rankov)

That same day we got the results from the Scientific Veterinarian Institute of Novi Sad, that the body of a Jackal previously taken there was positive to carbofuran. Additional toxicological analysis of the White-tailed Eagle, Common Buzzurad and 2 more Jackals will follow.

This case is particularly significant and dangerous to us, because of its proximity to the Imperial eagle nest. We are thankful to our colleagues from BirdLife Hungary (MME Hungary) who responded very quickly to our call for help and put their search dog to our services.

The only positive side of this case was to see all the efforts put in the fight against bird crime through this project start to become more visible in Serbia. We can judge that by the fast response and coordinated action between relevant governmental authorities and non-governmental sector. Now we can only hope that the perpetrator of this crime will be found soon and punished with adequate punishment.