The number of victims of illegal poisoning at Tura keeps rising totalling over 6,5 million forints! 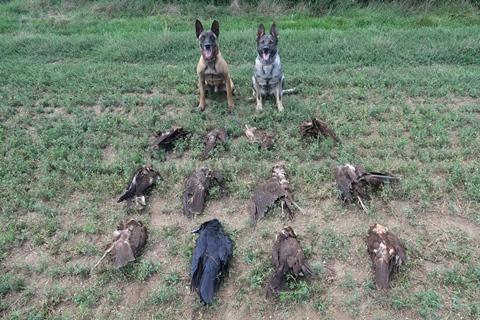 The search for carcasses and poisoned baits has been under way with the help of civilians and national park employees, detection-dog units, and volunteers for four weeks now, however, the list is feared to be still incomplete.

The investigation of the infamous poisoning case at Tura has been going on for four weeks but the numbers of baits and victims found are continuing to rise. The field searches have been actively carried out by the specially trained, poison and carcass detection dog units of the MME/Birdlife Hungary and Kiskunság National Park Directorate, rangers of the Duna-Ipoly National Park, and also helped by volunteers, and even reports from locals. Several new hotspots have been detected and the latest results revealed that the baits had been scattered over nearly 8,000 hectares covering practically the entire area of the Szent András Dombi (St. Andrews Hill) Hunting Club. 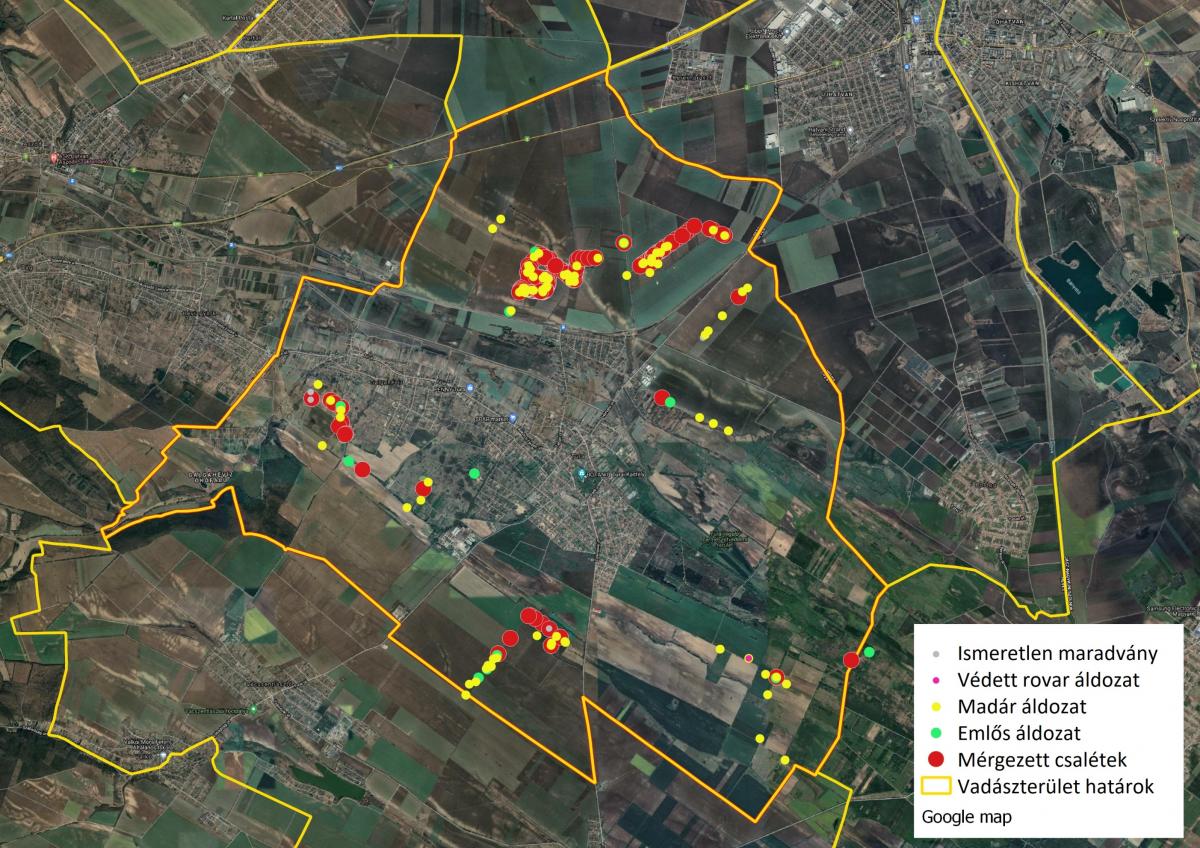 The offenders and the motive of the crime are not yet known. The method of perpetration and previous experience suggest that the aim of the offender(s) was to eliminate as many predators from the area as possible. One possible explanation could be that they wanted to protect their livestock, however, the scale of the poisoning makes this unlikely. The other most common reason for poisoning is the belief that by killing predators would yield larger quantities of small game for sport hunting.

Unfortunately, since the latest news, the numbers of baits and dead animals  -among them two specimens of the strictly protected White-tailed Eagle and Black Kite -  found have increased. However, not only wild animals fell victim to the poisoning: a local’s dog found and ate a poisoned bait, fortunately, the quantity ingested was quite low and thanks to the owner’s quick reaction the intervention of a veterinarian helped to save the dog’s life. The search dogs found two dead Marsh Harriers that were already concealed suggesting that the perpetrators had returned to the crime scene in attempt to cover their tracks. The timing of the poisoning was not typical at all as most of the previous poisonings have occurred during winter and spring. It cannot be excluded that such timing was deliberately put during the holiday season so that nature conservationists may find out about it less likely. 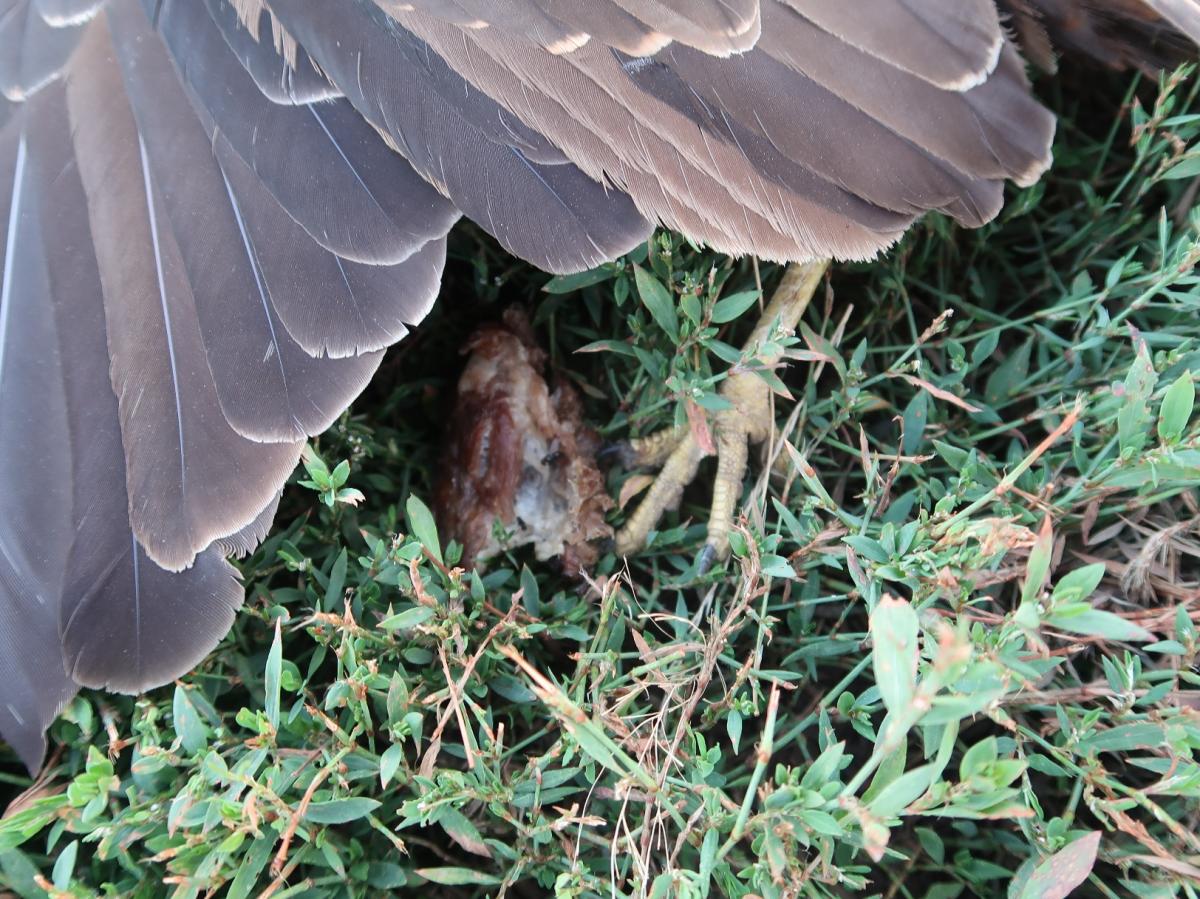 A poisoned baits and its victim (Photo: Gábor Deák, MME).

Owing to the coordinated work, there have been 246 hits in the surveyed area so far: 114 poisoned animals and 132 baits. Among the victims there have been 93 specimens of eight protected species: 76 Marsh Harriers, seven Common Buzzards, three Ravens, two Black Kites, two Tree Pipits, one Montagu’s Harrier and a Calosoma auropunctatum beetle reaching over six and a half million forints in combined nature conservation value. In addition to these, four pets (two dogs and two cats), 11 specimens of game species (eight foxes, two Carrion Crows and one European Jay) also fell victim to the poisoning, as well as six other animals that remained unidentified due to their state. Two of the animals found alive, a Montagu’s and a Marsh Harrier, could be saved and released later due to rapid veterinarian treatment. 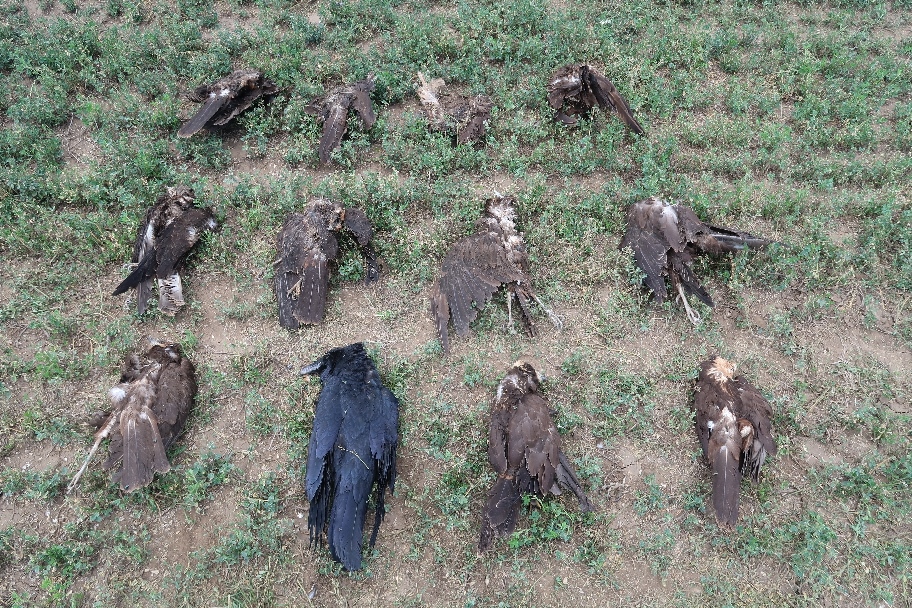 The number of Marsh Harriers found is exceptional and unprecedented in this poisoning case, possibly due to the timing of their migration as well as the Zagyva River being a prime migration route for birds arriving from the North.  (Photo: Gábor Deák, MME).

Two-thirds of the carcasses and baits were found by the MME’s and to a lesser extent by the Kiskunság National Park’s dog-units proving well how effective can be the use of such units in the fight against poisoning. At the same time, the clues found by rangers of the Duna-Ipoly National Park and numerous volunteers also greatly helped to find the sites, where poisoned baits were deployed. Additionally, dog-walkers also found three such sites. 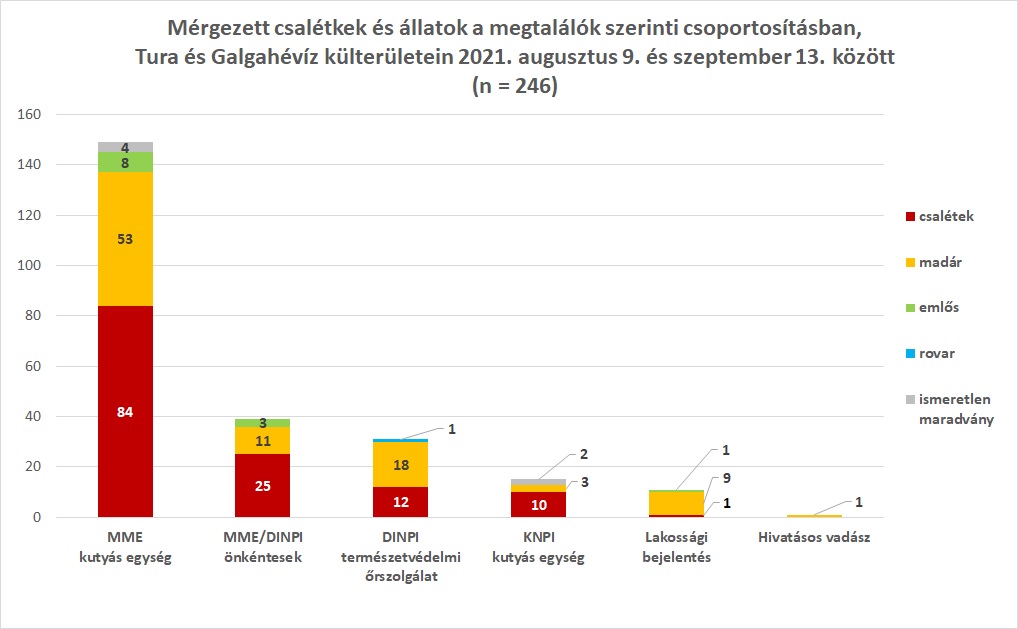 A family walking by witnessed as a poisoned Common Buzzard fell off the sky dead and they even touched the carcass, during which, they could have been poisoned as well. This poison, especially in such doses, is not only a threat to the predator, but also to any animal or human that comes into contact with it. A poisoned fox was also found that was partly eaten by Wild Boars posing the risk that the poison entered the populations of game species too.

To our knowledge the Gödöllő Police Headquarters have carried out six on-site investigations so far. According to the police statement, the laboratory test revealed that the perpetrators used a highly toxic neurotoxin. Several formerly discovered clues suggest that poisoning had already occurred with less intensity in the area a few months before. Besides, in 2010, a similar crime had already been investigated in the area of this hunting club. Then, one Eastern Imperial Eagle, five Ravens, four Common Buzzards, three Marsh Harriers and a Carrion Crow were discovered around the baits of poisoned chicks. 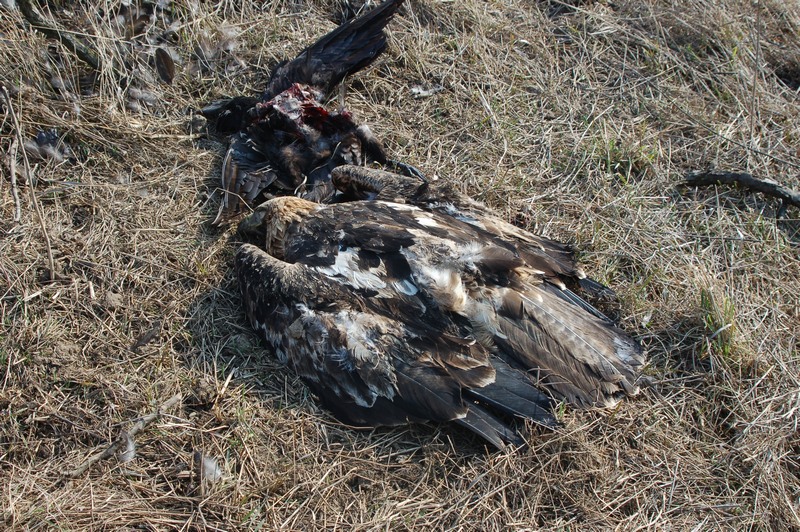 The legs of the Ravens and the Carrion Crow were cut off as proof of kill, a common practice among hunters. The cause of death was the very same pesticide then, that has been banned for 13 years now.

We continue to urge hikers, bikers, dog-walkers and anyone working outdoors to avoid touching any suspicious pieces of meat, chicken eggs or dead animals and to contact authorities immediately if poisoning is suspected!

And of course thanking the dog unit: Carlo, Hella andSamu, without their work the majority of the baits would have never been found and many more birds would have been killed!