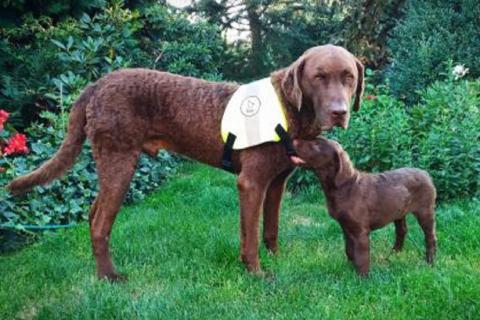 The handler of the PannonEagle Life project, Klara, chose him on the basis of results of her own tests and recommendations of the breeder and at the same time, she chose one of the names which were proposed by the fans of the Czech Society for Ornithology. A dog boy who will be trained to find poisoned baits which often poison rare and critically endangered raptors, got name Victory and according to Klara, he is as good in the training as in making mischiefs.

The dog handler Klara Hluboka decided to choose Chesapeake Bay Retriever, as the most suitable breed, after a great experience with her 8-year-old Chesapeake Bay retriever Sam, who has already had nearly three months of training to search for poisoned baits and raptor cadavers, as well as several sharp events. When selecting a particular puppy suitable for this work, tests and long-term monitoring of puppies by the breeder helped. Klara offered an unknown object (empty can) to puppies and watched how they would respond to it. A dark dog boy showed interest immediately and started to chew it. Even when responding to different toys and another test when Klara tested smell and tracing ability, this fearless dog was doing very well. In addition, the breeder recommended him as the most suitable puppy and so only confirmed the results of the test.

A lot of suggestions came to us from our fans and Klara chose for the new member of her team name Victory, shortened to Viky. Viky is getting used to a new home and undergoes basic training, such as practicing to stay and obey the call. On the other hand, Sam has to get used to a new member of the pack. As soon as Victory master the basics, Klara will begin training him for the PannonEagle Life project. He will learn to find baits and dead animals and mark them so that he does not touch them and so do not risk poisoning himself. We wish him and whole team good luck and believe that Victory will bring new hope for our victory over carbofuran.