New chapter starts in the fight against poisoning of eagles 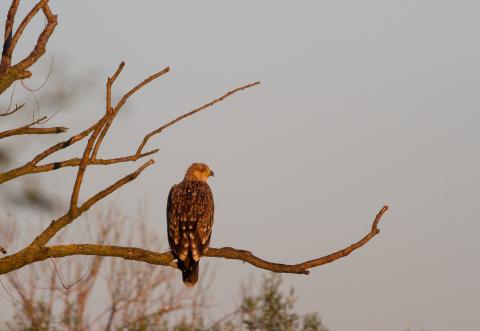 Although, fight against illegal bird poisoning may seem to be tilting at windmills, fortunately close cooperation of stakeholders has greatly improved the situation in recent years. MME/Birdlife Hungary had coordinated the EU and government funded Helicon Life programme between 2012 and 2016, which aimed to reduce poisoning of the Imperial Eagle.

One of the main tasks of the programme was to prepare uniform field, veterinarian and police investigation protocols for the groups of professionals participating in it. In order to discover poisoning cases continuous field surveys took place nationwide, and we also introduced three different methods to help police work:

These methods and protocols resulted in that Hungary has become one of the most investigated countries in the world, and some of our methods were integrated into EU and international directives.

Further results of the programme:

Despite recent reduction in the number of poisoning of raptors, it still poses a serious threat both within the country and in neighbouring countries. The new, also EU funded, Pannon Eagle Life project offers good opportunity to continue the work between 2017 and 2021. Important actions targeting the protection of Imperial Eagles and the reduction of poisoning will commence in Slovakia, Czech Republic, Austria and Serbia besides Hungary.

Following the footsteps of the highly effective detection dog unit we used in the field, other special units will be established and start working in the Kiskunság National Park Directorate, Slovakia and the Czech Republic. In each countries, Field, veterinarian and police protocols will be developed in collaboration with the professional groups concerned. In several areas, “eagle-friendly” habitat development will help prey species find suitable biotope.

Along with all this, raising awareness for nature conservation will also continue. Further information in relation to the project is available on the www.parlagisas.hu and the facebook page of the PannonEagle LIFE programme.