Large compensation for a poisoning case in Serbia 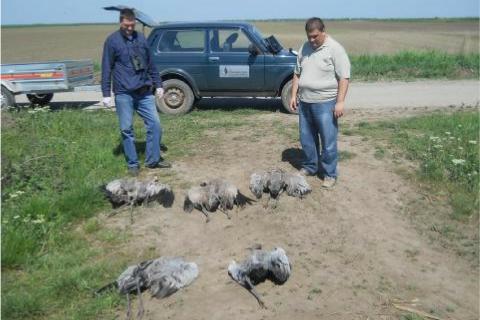 Compensation amounting 400.000 RSD (ca 3360 EUR) was imposed for a case of Common Crane poisoning and paid to the Institute for Nature Conservation of Vojvodina Province. This is so far the largest legal outcome in cases of illegal killing of birds in Serbia!

After the decision of the Basic Public Prosecutor’s Office in Kikinda, D. Č (57), a person from the village Crna Bara in Novi Kneževac Municipality (Vojvodina Province) has compensated a damage caused by killing of five Common Cranes (Grus grus) by carbofuran – highly toxic pesticide banned in Serbia – on its field.

What exactly happened? On 21st of April 2016 near Novi Kneževac, five dead Common Cranes were found in a ditch close to the corn field owned by Č. D. The report came by a member of Bird Protection and Study Society of Serbia Dr. Attila Ágoston. His colleagues, who are game wardens, have seen a larger flock of cranes barely able to fly, after landing on a freshly sewed corn field, and some birds laying on the ground. Two inspections (Environmental and Phytosanitary) have inspected the site and found the birds in a nearby ditch, as well as remnants of crane feeding in a field. Toxicological analysis of both carcasses and corn plants has proven that the cranes have died after immediate poisoning caused by a very high concentration of carbofuran in their food (remnants of freshly emerged corn plants and seeds dug from the soil and then consumed by cranes).

„Carbofuran is an active substance of insecticide which was on the market in Serbia till late 2014, when it was banned by the Ministry of Agriculture, according to the EU legislation, as it was hugely toxic for wildlife (among other reasons). Despite of that, there are still storages of this pesticide in private households and some companies and it is widely available on the black market“, says Marko Tucakov PannonEagle team member of the Institute for Nature Conservation of Vojvodina Province. However this was neither a sentence nor the full environmental compensation (which would amount 200.000 RSD for a single bird). Despite the fact that D. Č. has admitted his act, the prosecutor has decided that deferred prosecution will be used in this case, therefore rejecting criminal charges that were submitted in the meantime.

This amount will be used by the Institute to offer a supplementary healthy food to the Common Crane flocks which land on their autumn migration around Slano Kopovo Special Nature Reserve – their most important stopover site in Serbia, collecting up to 20.000 migrating cranes.