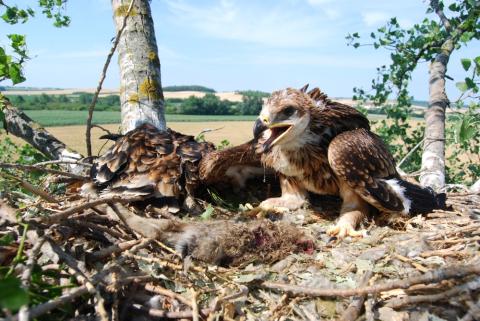 In the 2022 breeding season eleven pairs of Imperial eagles were successful in Czechia and raised nineteen chicks. In total, birds occupied eighteen territories.

The ornithologists gave to two chicks GPS-GSM loggers to watch their movement. "One of them is wintering near Austrian-Hungarian-Slovakian border. The other unfortunately died from uknnown reason before it left wider area of nesting place," says Horal.

In 2022, for the first time, Imperial eagles nested outside the area of Southern Moravia - in central Moravia and southern Bohemia, which indicates the successful settlement of new territories.

Also, the year 2022 was the most successful in history with number of nineteen chicks and eighteen pairs.

The center of occurrence of the Imperial eagle in the Czech Republic is the area of floodplain forests at the confluence of the Morava and Dyje rivers in the Břeclav region. Young and old birds nest here, including the 28-year-old female. "In the Important Bird Area Soutok-Tvrdonicko bird area, where the Imperial eagle is one of the objects of protection, a female, who at the age of 28 is the second oldest known Imperial eagle in the wild, successfully nested again last year. We know her age thanks to the fact that she was ringed as a chick in eastern Slovakia in the Trebišov district. Five pairs nested in the Soutok-Tvrdonicko area last year. They raised a total of eight chick, three pairs of two and two pairs of one chick each," says Horal.