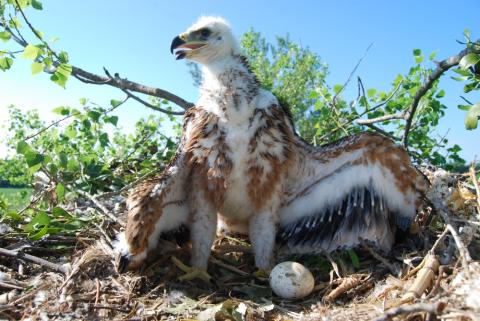 In the 2021 breeding season seven pairs were successful in Czechia and raised eleven chicks. In total, birds occupied fourteen territories, all in southern Moravia.

The ornithologists gave to five chicks GPS-GSM loggers to watch their movement. "One of them is still in the southern Moravia, three in the eastern Austria and one in Hungary near the lake Balaton," says Horal.

Two nests that were closest to each other were found in Břeclav district. "They were about 1200 metres from each other. Both nestings were successful," explains Horal.

Last year, Imperial Eagles had seven chicks in Czechia. "The most chicks in the history was in breeding season 2016, when six pairs raised twelve chicks," informs Horal.

Unfortunately, this year, the Imperial Eagles had a bad luck. After four years the ornithologists recorded one poisoned individual in April in Hodonín district.

This year the police has taken over 28 cases of poisoned animals from Czech Society for ornithology so far. Since 2017 it's been 102 cases that the police took over from CSO. This year, for the first time in history, bird of prey poisoner was convicted in Czechia.