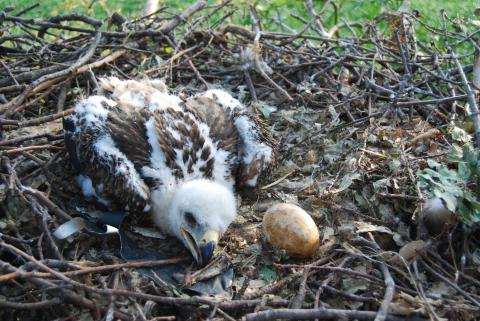 In the 2019 breeding season five pairs were successful in Czechia and raised six chicks. In total, birds occupied ten territories, all in southern Moravia. "In the Czech Republic there's never been nesting more than 10 pairs in one season so far, so every raised chick is a big success," says David Horal from the Czech Society for Ornithology.

Last year, Imperial Eagles had only four chicks in Czechia. In 2017 they had ten chicks. "The most chicks in the history was in breeding season 2016, when six pairs raised twelve chicks," informs Horal.

This year, the eagles had a good luck. Ornithologists have not recorded any poisoned individuals, but humans continue in killing birds, including endangered birds of prey. “By the beginning of September, we dealt with 54 cases where the poison was either directly proven in the laboratory or we could have assumed it according to the position of the bird and dead insects nearby," says Klára Hlubocká, a dog handler from the Czech Society for Ornithology, who searches for poisoned baits and dead animals.