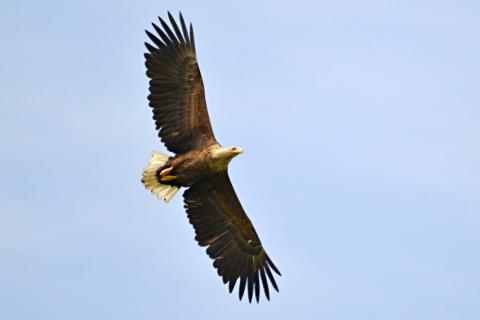 For the first time in history, bird of prey poisoner was convicted in Czechia. The judge found the man guilty on all three charges. The man was given suspended sentence - 2,5 years of imprisonment with a delay of 3,5 years. Klára Hlubocká, a dog handler in the Czech Society for Ornithology, testified in court, as she is searching the field for poisoned baits and their victims and handing over the documents to the police.

In March 2019, a man was to poison two White-tailed eagles and two ravens near Mečichov in the Strakonice region. In May of that year, the police found carbofuran and endrin in man's house. Laboratory analyzes revealed that the eagles were poisoned by carbofuran and the ravens by endrin.

On 29th April, the man was found guilty of all three charges - misappropriation of wild animals, possession of narcotics and psychotropic substances and poison and cruelty to animals.

"I have been dealing with bird crime for over 20 years and now I have finally seen the first convicted poisoner. It is an extremely important signal for those who do not take nature conservation seriously, that society is interested in protecting it and is interested in enforcing protection if necessary in the form of a court decision. We are not happy that someone has problems with the courts, but the nature and lives of these birds are worth it,” says CEO in Czech Society for Ornitology Zdeněk Vermouzek.

This year the police has taken over 21 cases of poisoned animals from Czech Society for ornithology so far. Since 2017 it's been 95 cases that the police took over from CSO.