The appellate court confirmed the judgement for the bird poisoner 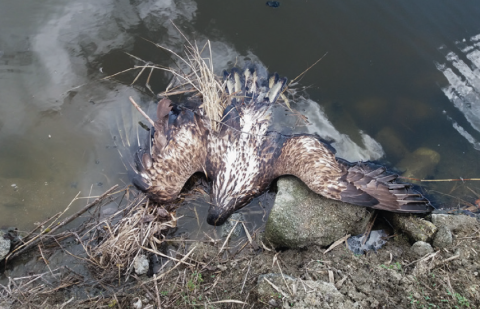 The appellate court in České Budějovice confirmed the judgement for the bird poisoner, who killed two White-tailed eagles and two ravens near Mečichov in the Strakonice region in March 2019. The man was given suspended sentence - 2,5 years of imprisonment with a delay of 3,5 years. For the first time in history, bird of prey poisoner was convicted in Czechia.

Klára Hlubocká, a dog handler in the Czech Society for Ornithology, testified in court, as she is searching the field for poisoned baits and their victims and handing over the documents to the police.

The judge found the man guilty on all three charges - misappropriation of wild animals, possession of narcotics and psychotropic substances and poison and cruelty to animals.

"I have been dealing with bird crime for over 20 years and now I have finally seen the first convicted poisoner. The Czech Republic has thus become one of the countries that consistently protects its nature and does not tolerate bird poisoning. Potential future victims may hope that poisoners reconsider their behavior more carefully next time. And the rest of us can look forward to the fact that poisoning will one day disappear from our nature completely," says CEO in Czech Society for Ornitology Zdeněk Vermouzek.

This year the police has taken over 25 cases of poisoned animals from Czech Society for ornithology so far. Since 2017 it's been 99 cases that the police took over from CSO.