Another White-tailed eagle was poisoned in Czechia 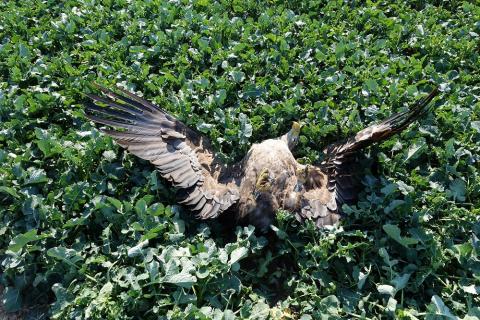 On 25th March 2020 the poisoned White-tailed eagle was found near Roudnice in Králové Hradec region in Czechia. The analysis confirmed poisoning by carbofuran. Also 2 unhatched chicks died because the other eagle had left the nest. The case is being investigated by the police.

"The inspection of the nest on 27th March 2020 confirmed what we had expected. That the nest was abandoned. Respectively, the second parent was still moving around the nest, but no longer flew to the nest. There were 2 cold eggs in the nest," says Tomáš Bělka from the East Bohemian branch of the Czech Society for Ornithology (CSO).

Klára Hlubocká, the dog handler in CSO found a poisoned Common buzzard nearby and also a piglet as a poisoned bait with carbofuran, as the analysis confirmed later.

"The White-tailed eagles from Roudnice  have not been hooked on roses in the past. They built the nest in 2018, in 2019 they left the clutch due to excessive interference by forestry equipment in the immediate vicinity of the nest. This season, the state nature protection, the East Bohemian branch of the CSO and the foresters agreed on measures to ensure the peace of the local eagles during their nesting. Hunters from the local hunting association also knew about the nest from its position. It's a paradox - while in one hunting the eagle doesn't mind, in the next one someone poisons it," says Lukáš Kadava from the East Bohemian branch of ČSO.

About 130 pairs of White-tailed eagle nest in the Czech republic. In order to protect this pair near Roudnice, the ornithologists cooperated with Czech State Forest, that stopped all od their work on the site. But unfortunately, somebody poisoned the eagle.